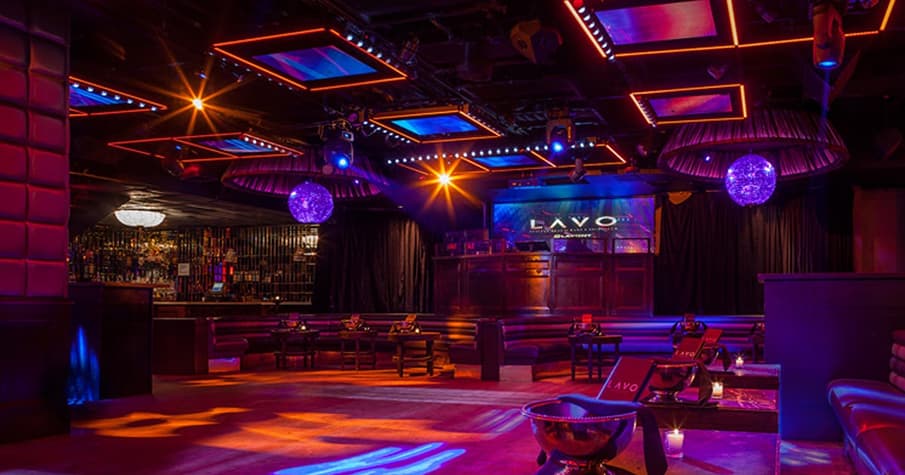 The LAVO nightclub has earned fame as one of New York City’s most preferred clubs. Since its inauguration a few years ago, the club has proven to be the destination for both celebrity bashes and headliner performances. Inspired by the original LAVO Las Vegas, LAVO boasts a downtown vibe with an uptown sensitivity to New York nightclubs.

LAVO is located at 39 East 58th Street, two blocks away from the southeast corner of the Midtown eastern Central Park. There are several different transit options in the surrounding area; one of them is near the 59th St. Lexington Avenue station, which provides services for N, Q and R trains.

When you think of LAVO, think of the feeling, think of the highest class and an impressive costume. LAVO Nightclub guest list has met with all the places, celebrities and high-class people throughout the NYC. The club admits this city with its most interesting, fashionable and rich people on every Thursday, Friday and Saturday night. The venue’s sound and lighting system are top notches; attracting some of the world’s most famous DJs.

LAVO has some of the most extensive table packages and bottle options when compared to other clubs in New York City. The least expensive option is for a four-person table reservation. This requires a minimum bottle purchase of $1,250 which comes out to an even split of $313 per guest.

Collared shirts, suit jackets, and some sexy footwear are a must. Ladies, take out those high heels and make a statement with a curve-defining dress. All the latest trends are sure to be showcased and touted throughout LAVO. Forgo that athletic gear, shorts, flip-flops, or baggy clothes. Casual and sportswear are strictly prohibited to maintain a fashionable atmosphere. Bouncers at the door have the final say of who is or who is not allowed into the club.

The crowd inside LAVO Nightclub consists mostly of upscale, trendy guests. To get in and party with the big shots, you have to look the part. Bouncers at the door will not allow in those who fail to follow the dress code, so no one in your party should wear baggy clothes, ripped apparel, flip flops, jerseys, shorts, or any athletic gear. A fairly young crowd in their late twenties to late thirties graces LAVO most nights.

You can expect to hear the hottest house and dance tracks by top producers inside LAVO Nightclub consistently throughout the weekend. They are known for their world-renowned performers such as Steve Aoki, Tiesto, and Third Party. Unless specified beforehand, LAVO’s music will not alter greatly night-by-night.